This series is Q&A style interview to expose artists that don’t get much exposure and to provide them with a platform from which to grow from. Photo by picjumbo.com on Pexels.com

Photo by Kaboompics .com on Pexels.com

Oddly enough, I’m fairly certain I met Ananya the weekend he met his DJ partner Avi. Both Ananya and Avi are two minds behind “AVN“. Ananya has a certain knack for developing and creating a groovy a** beat and as a friend, I really admire his taste in music.

Anyway’s let’s get down to it!

In general, what does music do for you?

Music, for me, is an outlet for expressing emotions, creative ideas, and inspiration that I can’t express in other concrete ways such as words or actions. When I hear or am lucky enough to create a sound that moves me, it provides a dopamine rush that can’t be compared to any other experience in this world. And the absolutely positive energy that emanates from experiencing music you love with another person who also feels the same way, is beyond explanation. I am not a religious man, but it’s one of the few things in this world that moves me on a spiritual and transcendental level.

Who are you? What do you do? Where are you from?

My name is Ananya Mishra, and I was born in India, living in a few places in between until I finally settled in Houston, TX at the age of 5. My name means “without equal” in Sanskrit, and definitely had an impact on shaping how I’ve perceived myself and the impact I want to make on the world (for better or worse). I went through a few musical phases in my life, starting with classical (cello), then heavy metal (guitar/drums), and then finally Japanese traditional music (taiko, bamboo flute) before encountering electronic music, and the influences from each have shaped the sound I strive towards. Oh, and I’m a software engineer as my day job.

How’d you decide on DJ and/or Producing? Why?

I was messing around in Logic within a few months of diving into electronic music. Having always been into computers & music and the intersection thereof my whole life, I knew from the beginning that producing electronic music was something I had the potential to make my own. I made my first shitty track within 5 months of starting out and the personal sense of fulfillment I got from that was addictive beyond measure, and sealed the deal. I knew this was what I wanted to do long-term.

I didn’t start DJ’ing until about 2 years after I got into the electronic scene – on the same day I got my first set of decks, I also met Avi (the other ½ of AVN/my DJ partner) and we were quickly spending weekend and after weekend honing our craft and learning from each other to quickly get where we are today. It was cool to have worked on production long before starting DJ’ing as I felt I had gained a lot of sensibilities for mixing before even touching decks for the first time.

How’d you form the name “mphatiq”?

My stage name ‘mphatiq’ is a stylized version of the word ’emphatic’, meaning “showing or giving emphasis; expressing something forcibly and clearly.” 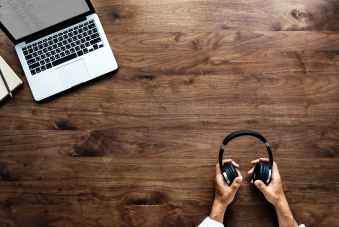 I strive to create a sound and performance on stage that impacts people in a way that they will remember long after the fact, and I felt this name embodied that ideal. The stylization, which is loosely French-inspired, came from my strong passion for underground French house DJs and their aesthetic. I also appreciate how it evokes the word “empathic”, which is also important to me as I seek to connect to others on an emotional level through music.

One of the most difficult aspects about the music scene?

I’d say the most difficult aspect in the modern electronic music industry is creating a truly unique sound that rises above the rest and creates an experience the listener hasn’t had before. With the advent of YouTube tutorials and the democratization of knowledge on the internet, the bar to producing music has been lowered, which I think is awesome, but at the same time, has oversaturated the electronic music market with a lot of tracks that sound the same, or are of low quality.

I can’t honestly ever say that I listened to electronic music without an analytical ear. From the very beginning, when I was listening to nothing but deadmau5 and Pryda’s progressive house and trance melodies, it felt like I was always listening with an eye towards “how would I do this myself?” “What would I create?” “What can I take away from what these masters of the art have created?”

That part of my brain rarely shuts up, which is a double-edged sword.

However, sometimes it’s nice to shut off that analytical side and just fucking dance to some good tunes. Luckily, I have friends around me that are honest enough to tell me to stop overthinking and just enjoy when we’re out at shows, and I’m grateful for them.

Right now, I’m really digging Madeaux, an artist out of LA who has a dark, almost sinister, electro-influenced rhythmic bass house sound. His set at Lightning in a Bottle this past May was one of the best live DJ sets I’ve ever seen, and his seamless mixing combined with his elegant, tastefully diverse track selection really left an impression on me. His stage presence was also incredibly smooth and almost cocky in a way that was really entertaining. I can’t wait to get him back to the Bay again.

Any other upcoming Artists and/or new Tracks we should know?

I’d check out Bloodtone, Kage, and Matroda’s latest stuff. These guys are really pushing some of the greatest sound in the bass house scene right now. This is the sound I strive towards myself as I find it utilizes the physical aspects of sub frequencies during the live performance in a way that most other subgenres of house don’t do too well. I see it as combining the deep, dark, consciousness-expanding sounds of West Coast Bass with the more upbeat driving rhythms of house music in a way that creates novel sensations and makes you wanna move.

Any mixes/tracks of your we should check out?

A recent release I’m proud of is this remix of Zhu’s epic track Nightcrawler that trades out the 4/4 house beat and rolling melodic bass line for a more trap inspired breakbeat and deeper minimal bass:

I was gunning to make something more danceable and driving than the original, and I’m a fan of how it turned out.

Do you have any cool shows or prospects in the future?

This coming August, I’m launching a monthly party in San Francisco called GCODE (GCODE in San Francisco Aug 18), designed to showcase the bass house & g-house sounds I’m so passionate about, as well as provide a platform for artists in these genres to get their names out there. It’s a sound that is hard to find in San Francisco aside from the occasional visiting artist, and I really want to create a devoted scene for it here.

Photo by picjumbo.com on Pexels.com

Also, I’ve just gotten signed to G-Mafia Records based in Brazil, a label that specializes in Brazilian Bass & G-House, so look out for my first original release on Spotify, iTunes, and SoundCloud in the next few months

Anything more to add?

“Question everything, assume nothing, take no prisoners.” – mphatiq

Check out mphatiq’s latest mix and preview of his new monthly party below!

Thanks for tuning in everyone! Be on the lookout for the next artist to come sooooon!